Founded in 1906 by Xavier Givaudan & François Lavirotte, the Givaudan-Lavirotte factory produces high-quality active ingredients intended for use in pharmaceutical, nutritional and cosmetic products. It is located in the center of Lyon city.

Today, Givaudan-Lavirotte employs around 110 people working on site. The site is approved by the ANSM and produced according to GMP standards.

Its main products are:

Site certification according to the FSSC22000 (food) standard is in progress in 2020.

The active ingredients produced on the Givaudan-Lavirotte site are used in highly sensitive applications (milk for premature babies, drugs of major therapeutic interest, injectable solutions, etc.). The site is therefore complemented by 2 highly equipped laboratories (physico-chemical and microbiological) and a reinforced Quality team.

Founded in the 1950s, Bernardy specialized in the reprocessing of metals. When it was purchased by SPCH in 1980, Bernardy began to reprocess copper solutions from the electronics industry for the manufacture of copper salts. Barium and Strontium salts have also been developed. In the 2000s, to cope with the disappearance of the electronics industry in Europe, Bernardy focused more and more on the development of alkaline and alkaline earth salts. Bernardy was then bought by Isaltis in 2011.

Today Bernardy employs around 60 people working on the site. Its main markets are in industrial applications, but the plant is developing more and more in the Life Sciences market (Oral Care, Cosmetics, Nutrition) with the establishment of a new dedicated workshop since the acquisition by Isaltis.

The site is in the process of FSSC22000 certification.

Its main products are:

The Bernardy site specializes in the manufacture of powders, their homogenization and also offers to make custom pre-mixes for the chemical or food / cosmetic industries. 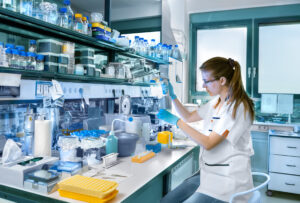